When and How Players Should Map: In which I Ramble on until I Tell you to Match the Type of Mapping you are doing to the Type of Adventure you are on.

I run a very old school game and I won't draw maps for my players when exploring dungeons. I like mapping, A good map is very useful and hopefully rewarding to make. Here are some things I think a dungeon map is good for:
My players are less enthused about mapping. More recent fantasy rpgs have done away with having players create their own maps of dungeons and other environs. Several blogs in past few years have also come out against requiring players to make their own maps. Here's a reasonably popular blog summing up the anti mapping sentiment:

For years, mapping formed a part of D&D that players tolerated, but that few questioned. Then, this revolutionary game seemed so fresh and intoxicating that even duties like mapping found love, just a lot less than the game’s actual fun parts.

Here is Geoffrey from the comments, he also hates mapping:

Enjoyed this reflection, David. I’ve always thought that mapping was stupid. We used to do it all the time with 2nd edition, but then it seemed ridiculous and unrealistic. I mean, if we accept that the player-characters have the time and luxury to make a reliable map (and often times the DM would assist to make sure they were correct!), then why bother? Just let the DM answer all the questions you might have and direct you accordingly? And if the DM *wasn’t* clear with directions/descriptions, then there’d be an argument when discrepancies emerged.

Of course, with the advent of erasable, gridded mats, or even model dungeon-construction toys, mapping became unnecessary, and the “fog of war” was all you had to worry about.

I dislike mapping so much because of the immense time-suck, that I even look for ways to not have to make maps in the first place–AS A DM. lol During the 2E days, I had a copy of Ruins of Undermountain, but we never played that for what it was. I just looked for small sections of the map that had the kinds of tunnels and rooms I wanted, photocopied the area, then used a marker to black-out the sections I didn’t need so the map would be self-contained. A few notes in the margin, and then ta-da! A dungeon map. I have long sought a good system for random dungeon generation, since nobody really cares about the *shape* of the dungeon as much as the *adventure* inside it.o

The last sentence of Geoffrey's comment does the most work in illustrating why people don't like mapping. They don't think that mapping is part of the adventure. And you know what if the don't think that mapping is part of the adventure then it doesn't have to be for them. In an old school dungeon players get to decide what their goals. If they can have fun without making a map then they don't have to make a map. What I don't like is when players shift the map making responsibility to the dungeon master. The dungeon master has done enough work already. If players don't want to make a map then they should figure out another way to achieve at least some of the goals I outlined above.
Here is an idea from the Angry Dm:

First, let’s throw out the notion that it is in any way necessary for the party to produce a map of the same quality as one of Pathfinder’s in house cartographers. That s$&% is useless and pointless and it sets the bar way too high. Instead, let’s agree that the best way to map is the way that those of us who ever played a game Zork already knew – one of the old Zork games before graphics were invented that is. All the party needs is a flowchart. A room is just a box with a name in it. A connection between rooms is just a hash mark on the wall between the rooms. A hallway is just a line. That’s it. Quick and dirty.

The point is that a player’s map isn’t meant to be a f$&% architectural rendering. It’s just meant to show how to get from room to room and which rooms are where. Basically, a player’s map just needs to answer some very basic questions:

In other words, players don’t need a map. They need a flowchart. That’s it. Hell, it’s really just a list of rooms with identifying features and some way of showing how to get from one to another. These are perfectly fine player’s maps:

I think this is a great idea a flow chart can serve most of the purposes that an accurate map does. The only limitations of a flow chart are  in avoiding random encounters and finding secret doors. Let's see what the comments have to say:


No. Just no. Ten years of having to map other people’s fucking dungeons has taught me this is a waste of time. Getting rid of this was key to actually enjoying dungeons First of all, the reality is that verbal language is a shitty ass way to describe room shape, unless, as you say, all of your rooms are conveniently rectangular with at least one single distinctive feature and no complex spatial relationships. This describes almost no interesting building ever. Caves arent rectangular either.
More to the point, in real life, people have strong spatial awareness, which means walking around they rapidly build a spatial map. This does not apply to verbal descriptions, and adds an excessive amount of mental effort to the roll.
A key component of playing an rpg is being able to feel present and oriented in person. Making accidental fuck ups about basic room shape and orientation rampant makes that practically impossible. It’s even worse if you run a large group and people cant always make it every week (such is life). Then half the players have no clue where they are, and find it hard to contribute. I say this, and half of the people I play with work with building maps, now, though I suppose they didnt at the time.
Works well for wilderness crawls, though. I do like a basic global map to remind people of “you started in that village, and there are mountains over there”, but this may relate more to the issue of “large group, occasionally players cant make it” issue.

Ok, wow. Also this doesn't really address what the blogpost was about at all.
Anyway, here are some maps from my two most recent sessions:

The first map would be ok for trying to find secret doors and does a great job of depicting the encounters that the players had during the session. The second map depicts a long journey but in a disjointed way. It might not do a good job at helping the party explore further or retrace their steps. It does do a good job of providing snapshots of the parties adventure throughout the delve. We can see that they were followed by cats, that one of them drank beer. It lists prominent landmarks that may be worth returning to but isn't clear on exactly how to get them. I think that when like here the party is documenting a broad sweep of the dungeon, a flow chart is better than trying to construct an accurate map. The first map was made while the party was doing a more focused search of an area while looking for a specific item. When doing something like this all the benefits that a detailed map give are important. You can see that more care was put into the dimensions of this map and I think that reflects the task that the party was engaging in.

More on Dungeon Mapping and Darkness

Here be Monsters My last post triggered another one of these reactions: There is an element in old school d&d that having players map t... 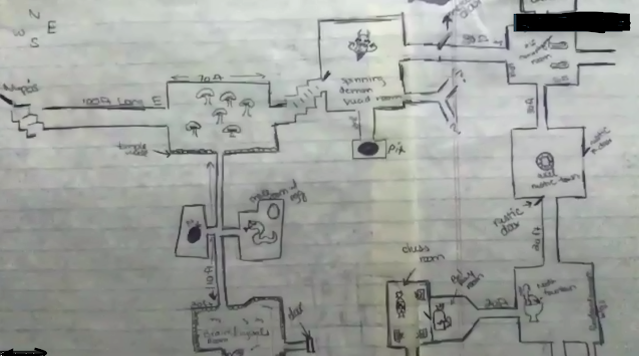