You're Playing OD&D. You get your fighting-man to 9th level. He raises and army with all his gold. He travels to a hex on the map. He rolls to see if there are any monsters in that hex. He kills the monsters. There are now 2d4 villages in that hex. Each has 1d4 *100 people.

Where did they come from? Were they always there?

Maybe each hex on a map has villages. This would mean that the wilderness is not so wild and that when a party is travelling (I am not British, just an asshole) through the wilderness they should be more likely to meet a village as they are to meet 1d4 manticores or whatever.  Despite this the OD&D tables from Wilderness and Adventures shows that "Men" have a 1 in 4 chance of appearing, suggesting that there are not in fact 2d4 villages in every hex. 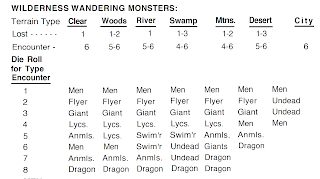 Ok, What if they weren't always there then where did they come from?

I think as far as Gygax is concerned the answer is, "who cares? Don't worry about it."  These people are spawned out of the wilderness in units of whole villages waiting to be taxed. This might be ok in a world with spells and gods. Maybe you build a castle and a god comes down and breathes life into some piles of clay and they become your peasants, a publica ex dei (I don't actually know Latin either).

What if I don't like that and want a bunch of new stupid rules?

You're Playing OD&D. You get your fighting-man to 9th level. He raises and army with all his gold. He travels to a hex on the map. H...