I was talking to a friend on twitter. This is my one internet friend I have who I met in person at a con. He wanted a supplement based on some Manga. Now, Manga is largely reactionary brain poison and this one is probably no exception. But that is what we like now. We love our little cartoons. We love our little Goku's and our 2,000 year old dragons that look like sexualized twelve-year-olds. We love it.

Apes: We got 3 sizes of apes. I remember seeing video as a kid of people eating a monkey’s brain. I remember the monkey still being alive. A quick google reveals that this is probably bullshit. So let’s not do Orientalism and save our PCs from prion disease.

Sometimes nobles will coerce peasants or serfs to eat ape brains raw. Then the Nobles keep the peasants on their lands as hermits and show them off at garden parties. The guests get to watch over the course of a few months the peasants go insane and then die.

The rest of the meat tastes tough and gamey. You are going to need to cook it slow with lots of extra fat.

Ants: I ate bugs once. They weren’t that good. Apparently ants tasted different depending on species but I read that big ants are bitter with a nutty taste. So giant ants would probably have a really bitter taste.

probably soak in water and add an acid like lemon juice to remove the bitterness. or sugar curing.

Bandit: Let’s be real if you are running a world based with a  Feudal system. Then the bandits are probably the good guys. The nobles are bad. Kings are bad. There is no such thing as a good king if they were good they wouldn’t be kings grow up. But look if you want to eat the good guys go for it. Bandits taste like normal humans but every time you eat one there is a 20% chance you develop class consciousness and start crying, Unless you are a noble or an aristocrat.

Basilisk: Many cultures eat Lizards, very few eat lizard kings. The meat is delicious fried. The meat is succulent roasted as long as there is enough fat in the pan. Don’t forget to baste it. But watch out brave adventurer, you might acquire a taste for royalty. After eating the Basilisk save vs Gaze (We are using Blueholme™ rules here) or you are overcome with a desire to eat the rich and powerful. This desire can only be quelled by a bestow curse spell restoring your false class consciousness.

Bat: You want to eat some bats. You can’t eat bats. That’s how you start a Covid epidemic. Where have you been these past few years. Or maybe not who knows anymore who can we trust. When someone first tries to eat a bat flip a coin heads they become patient zero for the novel Coronavirus. Tails, and Covid comes from a lab and they are totally fine.

Bear: You can eat bear meat but you better thank the bear’s ghost first or you will get trichinosis. You also have a 1 in 6 chance of getting trichinosis if you don’t fully cook the meat. Make a stew. Michael Thomas should have put some more fatty monsters in his bestiary because once again we have a monster that is going to need some added fat in the recipe to make the meat tender. Or some acid. Unfortunately slimes are in the second half of the alphabet. But yeah spoilers: Slimes used in small quantities in recipes are going to make a lot of this tough meat tender.

Also FYI trichinosis will give you diarrhea and maybe kill you. Do not just cook this on a stick over the fire!
at February 21, 2022

Email ThisBlogThis!Share to TwitterShare to FacebookShare to Pinterest
Labels: Blueholme

I was talking to a friend on twitter. This is my one internet friend I have who I met in person at a con. He wanted a supplement based on s... 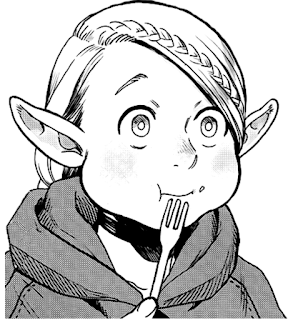