This session we do some more nonsense in the cave with the orcs and rescue this gnome we were supposed to rescue last time.

More importantly my cleric memorized speak with animals because I have never had a character memorize that spell ever. Obviously, I talk to my horse.  Uh oh Turns out the creepy horse guy from before his name is just the Russian word for horse has been up to some funny business with our horses!

We confront him later when he is trying fine us for riding our horses too long. He tells us he is prepared to issue a citation for Horsey Negligence.  We tell him that we know that he is a perverted corrupt half-horse horse cop.  He rides (or I guess he just runs cause he is the horse)  away and we start looking for his archenemy, who is this wolf who breathes cold breath or something (I don’t know it doesn’t really sound that scary to me).

Anyway we find the wolf and this hobgoblin guy riding it and they are totally unreasonable. They do not want to chase down the horse abuser. Instead we fight him (turns out cold wolf breath only does like 1d6 damage or something so no big deal).

Also I talk to some bats. and the magic user, Io charmed a hobgoblin and we named him “Hob Lowe”.

Session 7: Seeing through all Time and Space

was a real turning point for Bytor Goldenbeard, our stout and hearty dwarf. You see, Yutnib the cleric (that’s my guy( who is a girl)) was plotting a way to kill or subjugate the horseman fro his continued transgressions against defenseless horses. Bytor asks “wait is this all real, with the citations and horses?”

Yutnib insists that it is real but now it seems like we are living in a fractured unreality. How can we say which part of our shared unreality is ’real’ and which isn’t? When we were joking about the horse guy being a sexual predator was that a joke. Did the fact that the players playing the characters and the dm all seemed to buy into and laugh at the joke make it a real part of our shared reality?

Can we undo it? Are Yutnib and Bytor now living in parallel unrealities where the horse guy both is and isn’t a pervy cop? Is one of our characters having a schizoid embolism? Are both? Will the walls of unreality come crashing down around us? Are we now playing Philip K. Dick & Dragons? Are we playing two different games? What is the nature of this game we are playing? 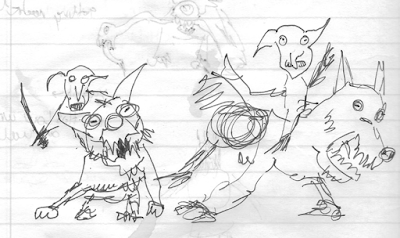 we also did  some stuff actually related to what the module is actually about. So we kill a bunch of stuff.

Hobgoblins.  Session 6: Hate the Police This session we do some more nonsense in the cave with the orcs and rescue this gnome we were suppos... 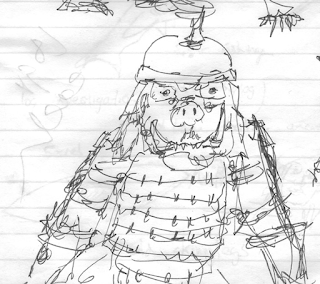