Session Report: All You Had to Do Was Ask

(Before we even start, I apologize for any misspelled names...)

Our intrepid adventurers were at it again. After being denied access to Raglum’s Tower, racing back to their stronghold, and facing a team of crystalline dust skeletons, the team opted to regroup.

As they discussed what seemed like very few, no good options, into the night, they heard a commotion approaching. Thinking it could be more Red Robed cultists or dust infected townspeople, the team observes what is actually Ves, Belray, Princess Consuela, Sven the Torch Boy, and Lister approaching, having met unexpectedly at a convention out of town. 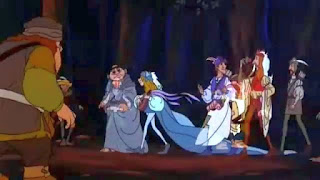 The group was allowed into the Nes Gard and brought up to speed on the situation. This took some time as some details were a little muddled - was the red stuff dust or smoke or a gas? IT WAS DUST (crystal dust in a fine powered form). What exactly were all the bad guys names again? And why had PlumBob run off screaming into the night while Herbert had simply become a mopey drag? Some question were answered. Others not.

Either way the discussion came back to how exactly to get into the tower and save Zander, Xylarthen, and the others trapped by Shagast.

The dungeons were filled with red dust. They were out. And it was assumed finally that as the guest DM didn’t actually want to step on the usual DM’s toes so to speak, it wasnt even worth checking the other entrances. That left the tower. Unclimbable. Unapproachable. But there had to be a way.

And as Sherlock Holmes told us, once you eliminate the impossible, whatever remains, no matter how improbable, must be the solution. So the adventurers opted to simply ask to be allowed in.

Sven, the Sexy (former) Torch Boy, very charismatic, with an 8-pack and no shirt, did most of the talking. Shagast was... Intrigued. He didn’t want money.  He was willing to allow the group to enter, which was suspicious, and he sounded just a little too amused by the whole idea honestly. 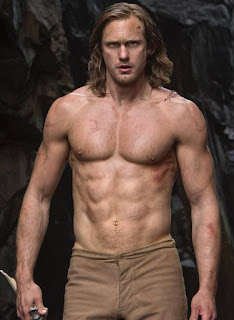 The party of ten, set to march forth. However, first, they noticed a small band of men, four of them, watching from a distance. A contingent approached the men to see if they were infected (they were not) and if they had any interest in joining the group going into the tower (they did). But they did not want to accept money. They were not sell swords. They were also hunting for a friend who has been lost during Shagast’s escape and were trying to find their own way into the tower. And well, strength in numbers.

So now there were 15 - Theodora, Herbert, Lister, Belray, Sven, Florence, PlumBob, Ves, Princess Consuela, Cade, Zeez Brightbow, and the group of four. They kind of looked like an angry little mob of oddballs. It was a lot of freaking people. But down the stairs they went, into the belly of the beast, so to speak.

The cavernous space before them was filled with a mist created by a giant waterfall coming from above and cascading down the stone face.  They found a set of stairs, which slowly looped around the space taking the team further downward.

On arrival at what appeared to be the next level down they found themselves in another large room, partially man made, partially naturally occurring, and at one end a massive set of carved doors. The image of the Hand was once again present here.

But then there were Ogres. Two very large ugly ones. Visibility was still obscured by the aforementioned mist. 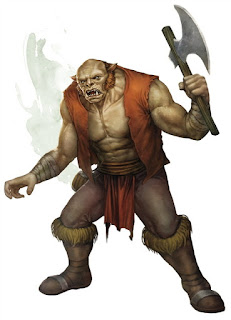 Theodora, who spoke Chaotic, chose to try it on them as no one could really understand what they were saying. There was a serious language gap but some information could be gleaned.

Namely that the Ogres were not going to just let them past, just because Shagast allowed them entrance past his minions and guards.

And it became unfortunately clear that the Ogres weren’t complete fools either. They called for back up.

They could not be reasoned with, so in an attempt to shut them up before others arrived, the party attacked.

Lister dearly wanted the Ogres for undead servants, so it was decided they had to die, which was a lot harder than people assumed it would be. And then the reserves arrived, cultists.

Some damage was taken and the handsome, young guy, of the group of four died. Pretty Boy? (It was Bright Eyes but I like Pretty Boy) People took a brief second to mourn a life lost too young. 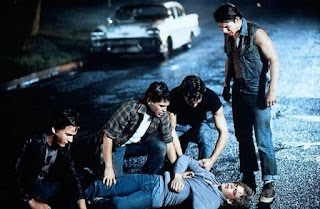 Lister got his wish and resurrected the dead. A team of human and ogre zombies to do his bidding. (Bright Eyes was not included in this as he went over the cliff edge)

Then they crept as quickly as possible through the massive doors.

The group came upon a hallway lined with statues of Shagast. Each one where he was posing in some foreboding or impressive way. The guy was clearly into himself. And had done some really quick magic redecorating. 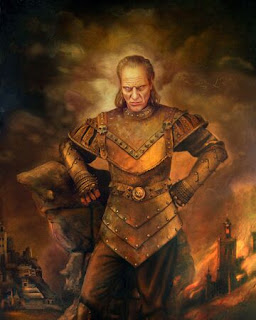 At the end of the long room a hall went off to the right and the left. And right at the center of the wall was the largest of the statues. PlumBob tried to creep around it. One of the eyes was pried out.

A low and behold, the statues began to come to life, trapping the team between them.

Lister tried to arrange the Ogres and human zombies in front of the statues as the others clumped together, hoping to face off attacks from all sides.

The statues were no normal rock, they were very difficult to destroy. But as they were destroyed, one by one, members of the party crept forward toward the largest statue, still unmoving, and voted to head toward the right tunnel. 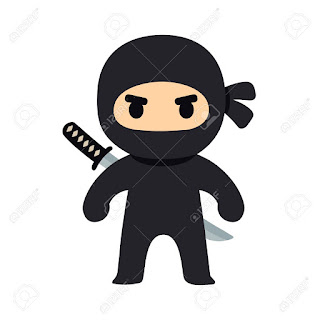 They fought valiantly. Lives were lost. Good men. Including Zeez - RIP - And most of the zombies, eternally disappointing Lister. But PlumBob and three of the men (Rafterman, Deuce, Biggs) remained, following behind the group after the statues were all destroyed. A single zombie cultist survived as well holding one of the giant gems taken from the large Shagast statue.

They made their way down the hallway to a room, which seemed like a marginally safe spot to stop and regroup. It was a lavish anteroom decorated with plush cushion, rugs, and other lounging paraphernalia. What could be better?

From Nes Gard with love, Theodora

Session Report: All You Had to Do Was Ask

(Before we even start, I apologize for any misspelled names...) Our intrepid adventurers were at it again. After being denied access t...